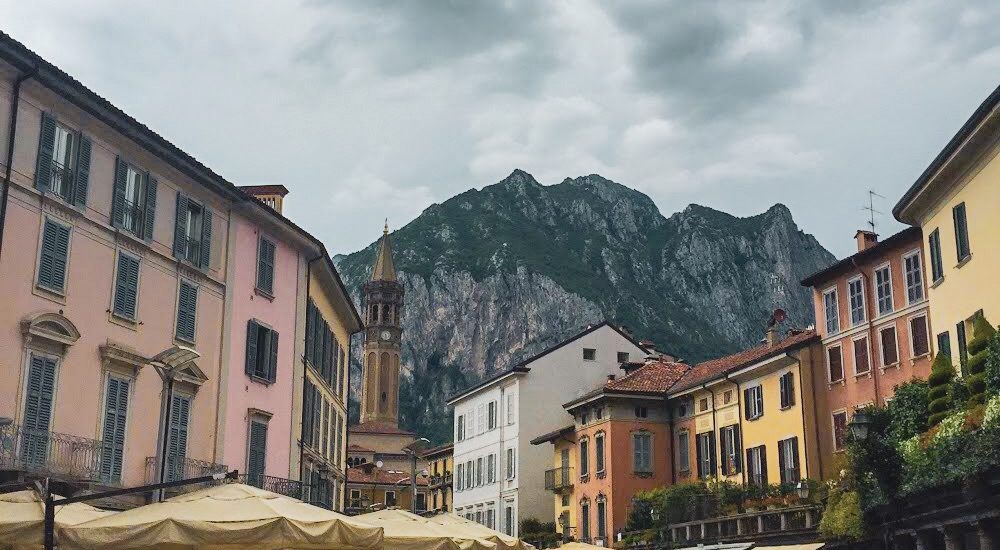 I have just realize that, almost a year after the launch of this blog, I haven’t told you yet about Lecco, the town where I’ve spent most of my life until now.

Lecco: why is it so special?

Lecco lies on the Lake Como. You probably know that the Lake Como is similar to an upside-down “Y” shape. The South-Western arm is where Como is located; the South-Eastern one is what is also called “Lake Lecco” and where my city is.

Lecco is also pretty famous among Italian people, because a very very popular novel, “The Betrothed” written by Alessandro Manzoni, an author born and raised in Lecco, took place here.

That branch of the Lake of Como, which turns toward the south between two unbroken chains of mountains, presenting to the eye a succession of bays and gulfs, formed by their jutting and retiring ridges, suddenly contracts itself between a headland to the right and an extended sloping bank on the left, and assumes the flow and appearance of a river. The bridge by which the two shores are here united, appears to render the transformation more apparent, and marks the point at which the lake ceases, and the Adda recommences, to resume, however, the name of Lake where the again receding banks allow the water to expand itself anew into bays and gulfs.

In the shadow of Como

Contrary to Como, Lecco isn’t actually so popular among tourists. Think about it! If you have the chance to visit Lake Como, you’ll probably go to Como, Bellagio and any of the other (wonderful) little town on the lake, right? I think you wouldn’t go to visit Lecco, if you don’t spend much time in the area. Well, I know, Como is Como. Como is undoubtedly beautiful and a lot of VIPs live or lived in the nearby of Como (see George Clooney!). Yet, Lecco has a lot to offer. For this reason it’s worth a visit and deserves to be promoted for its landscape, culture, architecture, gastronomy and water and mountain sports you can do here.

So, what are the main attractions in Lecco?

Okay, I have to admit that I have never visit my city as a “tourist”. I have always considered it so normal and… not so special. And for this reason I don’t even have so much photos of Lecco! However, almost 5 year after I moved from this city, I regret a bit not have ever visit it “as a tourist”. But, as I wrote before, I spent a great part of my life in this city, and I spent almost all the afternoons after school strolling up and down the city centre, to be now able to list the most beautiful and must-see places anyone should visit in Lecco at least once.

“Oh, com’on! It’s obviuos that I wanna see the lake. I’m visiting Como Lake!”, you’ll probably say. I’ve to confess that, according to most of my acquaintances (most of them born and raised in Como), Lecco’s lakefront is way better than Como’s one!

Going northwards, you can notice the golden statue of Saint Nicholas, the patron saint of Lecco, emerging from the waters of the lake. Instead, going southwards, you can find the huge monument to the fallen of the First World War and the statue of Pietro Vassena, who measured the depth of the Como Lake (about 400 meters).

Tip: if you like taking pictures, especially the panoramic ones or at night, I warmly suggest you to cross the Kennedy bridge and reach the town called Malgrate, located right on the opposide bank. From here, you’ll take a lot of stunning panoramic photos of Lecco and the sorrounding mountains: San Martino, Grigna, Grignetta and the majestic Mount Resegone.

This is one of my favourite piazza (city square) in Lecco. It is the square which links the city centre to the lake. Here you’ll find the oldest bars and cafes, a very strange fountain (the water comes suddently out from the paving!), the Viscontea tower, built in 1300 by the count Azzone Visconti as part of the defensive system of the town. From this square you’ll also have a nice view of the bell tower (called “Matitone“) of the Basilica of Lecco and the surrounding Mount San Martino and the Grigna.

Moving forward, on your left, you’ll have the Palazzo delle Paure, recently renoveted, that currently hosts an Contemporary and Modern art gallery, the tourist information center, and, at the top floor, the Osservatorio Alpinistico Lecchese (Lecco’s Alpine Observatory), telling the history of the mountaineering and climbing and Lecco’s most famous mountaineers. Indeed, Lecco is very popular for mountain sports and for the group of mountaineers/climbers the Ragni di Lecco.

3. The Cathedral of Saint Nicolas and the Matitone

Near the lakefront, the Basilica of Saint Nicholas is located. It is dedicated to Saint Nicholas, the saint patron of the city and boat men.

Inside the church, there is the statue of Saint Nicholas holding an apple in his hand. It is said that, arrived in the city, Saint Nicholas offered an apple to three poor boys. It is the reason why, on December 6th, the day dedicated to this saint, the children of Lecco receive a red apple, depicting Saint Nicholas with a white beard and the typical red miter on his head.

Another interesting thing of the church is its bell tower, otherwise called as “Matitone“, which means Big Pencil. This nickname derives from its shape, which resembles a big pencil. The Matitone is the symbol of Lecco. Separated from the building of the cathedral, this neogothic tower is 96 meters high, exactly as the London’s Big Ben! The Matitone is also the higher bell tower in Italy. You can go to the top of the tower, upon reservation (click here for reservation).

4. The places of Alessadro Manzoni

Lecco is the city of “The Betrothed” novel and the author Alessandro Manzoni. In 1891, Mr. Antonio Stoppani wanted a monument dedicated to him. It was hence realized by the sculptor Francesco Confalonieri and now it is placed in the square of the same name, Piazza Manzoni.

Additionally, in Lecco, in the Caleotto district, there is Villa Manzoni, the house where Manzoni himself spent his childhood and youth. Even though my high school was right in front of Villa Manzoni entrance, I have never visited it. I must remedy beacuse I’ve heard that it very beautiful and interesting!

Pescarenico is a small hamlet on the left bank of the Adda, or, rather, of the Lake, a few steps below the bridge; a group of houses, inhabited for the most part by fishermen, and adorned here and there with nets spread out to dry.

This is probably the most beautiful district of Lecco. Ancient fishing village, it is the only place precisely specified “The Betrothed” (chapter 4) by Alessandro Manzoni.

It is characterized by colorful houses and moored little boats that color the shore.

Tip: even here, if you like taking panoramic pictures, I recommend going on the opposite bank to have a nice view with the Mount Resegone in the background!

There would still be a lot to write about Lecco, but if you are in the Como Lake area, Milan, Bergamo or Brianza area, I strongly suggest you spend at least half a day to discover and enjoy this delightful town!

Lecco is so pretty that it is a pity not to visit it! And it is also a pity that it is poorly promoted both at a tourist and cultural level, compared to nearby Como, Bellagio or Bergamo!

6 lakes in Trentino-Alto Adige that you can’t miss!