The second day in Prague tested our legs resistence and we ended up very tired at night! Our feet hurted so much also during the next day, our last day in Prague. Our flight was scheduled to take off at 7 p.m., so we had half a day for discover something new in the city. We went for Josefov, the Jewish quarter, the most evocative quarter I have visited in the whole city!

Day 3 – Diving into the Jewish culture 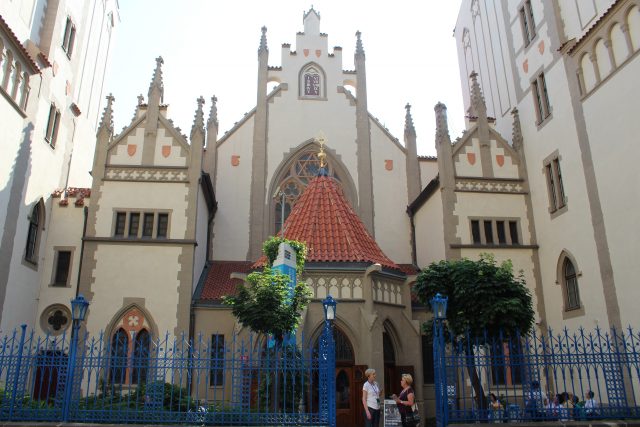 First of all, I’d like to give you some tips before leaving for Josefov:

Where can you buy the ticket?

You can buy the ticket in the shop near the Old-New Synagogue, or just before entering the Cerimonial Hall. 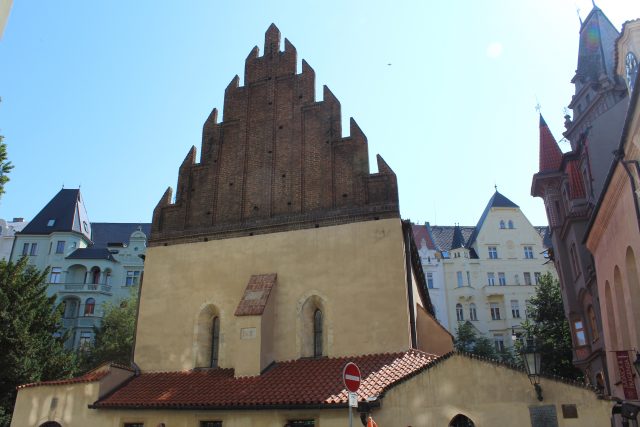 The Old-New Synagogue is one of the oldest synagogue in Europe and for more then 700 years it has been the main synagoge in Prague. Many of the most important rabbis have payed and preached here.

The Old-New Syangogue was very famous both in Prague and in the other European communities: a lot of stories have been told throughout the centuries about it. However, this spiritual centre wasn’t use just as a place for praying, but also as a gathering place for all the Jewish in Prague in case of pogrom. Furthermore, according to a legend, the angels, in the form of doves, through their wings, saved the Synagogue from the fire. It is the reason why, the synagogue preserved until today.

Even nowadays, this synagogue is used as oratory and as main syanogue in the Jewish quarter. 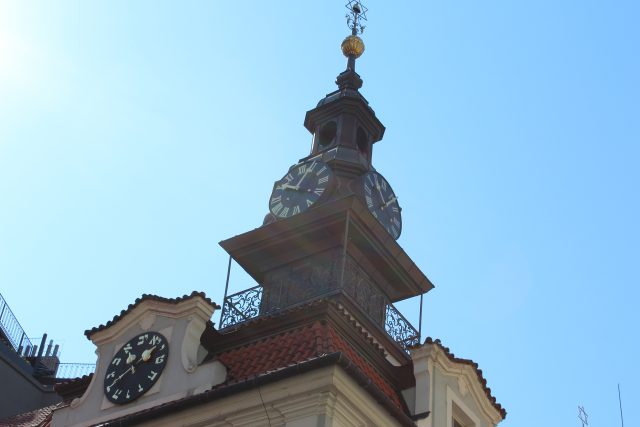 The Jewish Town Hall is on the left of the back side of the Old-New Synagogue. What you’ll probabily immediately notice is the clock tower. Here, indeed, you’ll see two clocks: one with the Latin numbers and one with the Jewish numbers. Pay attention to the Jewish clock: the clock hands goes counterclockwise! That’s becauese they read from right to left in Jewish!

The Klausen Synagogue is right near the Jewish cemitery and hosts a permanent exhibition about the festivals, traditions and customs of the Jewish society.

It was really interesting reading about the women role in the society and the festivities the Jews celebrate.

Right next to the Klausen Synagogue, there is the Cerimonial Hall, the morgue of the Jewish Cemetery and the headquarter of the Burial Society. Formerly, the Prague Burial Society had its office at the second floor of the building, while at the first floor they washed the dead corpses.

Today, on both the floors, you have the continuation of the permanent exhibition you saw in the Klausen Synagogue, but this time you’ll know about death for Jews and the Prague Burial Society organization.

In my own opinion, the exhibition is very very intresting, because you’re able to discover some hidden and curious points about Jewish culture and tradition.

Speaking of this, did you know that in the Jewish religion the corpses were washed and cleaned with eggs and wine and even their nails removed?

The Pinkas Synagogue is one of the most evocative synagogue in Prague and from it you can access to the Jewish Cemetery. At the entrance, their request you to wear the kippah, if you are a man.

The synagogue is now the Memorial of the Czech and Moravian Jews fell victim to the Nazism, during the Second World War. In 90s, about 80000 names of the Jews and Moravian dead during the Nazism have been handwritten on all the walls of the synagogue. Then, to make the atmosphere even more impressive, in the background, you can hear a voice reads all the names written on the walls. 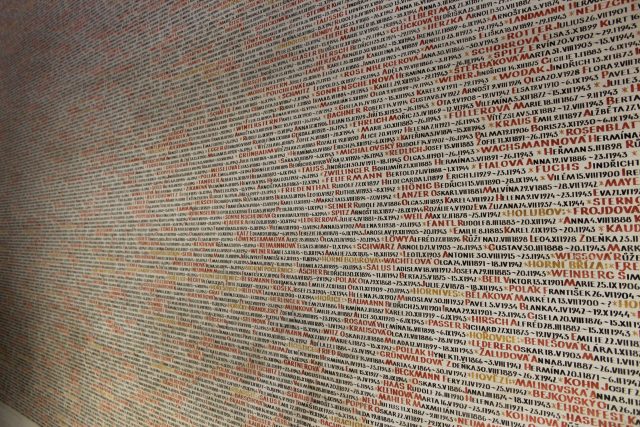 Moreover, on the second floor, the drawings of the Jewish children captured and interned in Nazi concentration camps are shown. 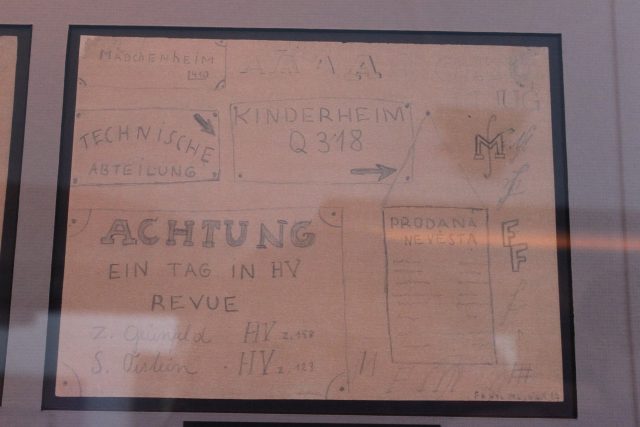 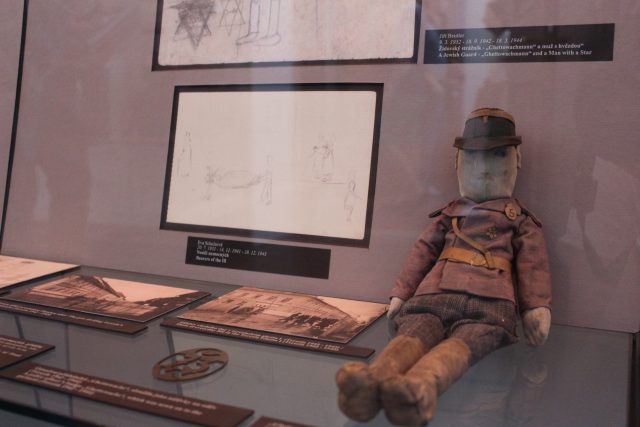 The experience is really evocative and makes you think. Absolutely worth a visit! 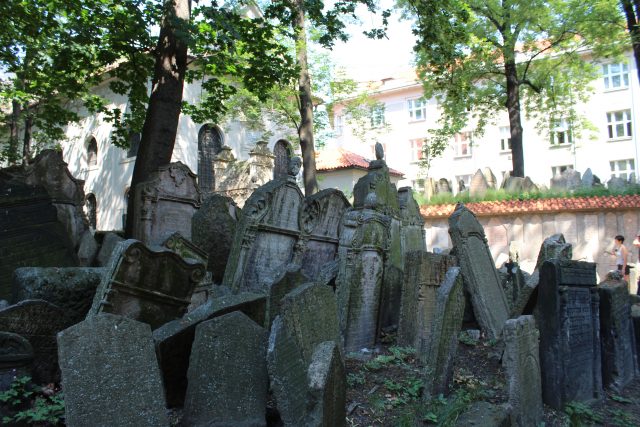 The Jewish Cemetery of Prague  is one of the most ancient in the world. Its construction dates back to the 15th century and had been using for 400 years, as it was the only place where Jews could be buried. It’s said that over 100000 corpses are buried here. Because of the limited space, the gravestones were piled one on the other forming 12 layers!

The gravestones are different from each other, but they’re all rather simple. On every of them it’s written the date of birth and death and some drawings about the profession or referring to the earthly life of the deceased. 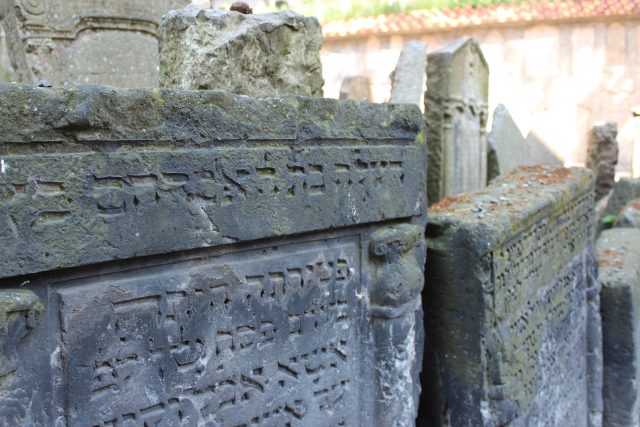 Also, in the Jewish Cemetery of Prague, some prominent people of the Jewish community were buried: for example, the poet Avigdor Kara (1439) was the first Jew to be buried in this place, or the scientist Joseph Solomon Delmedigo, a pupil of Galileo Galilei, is also buried here.

To visit to the cemetery you have to walk the small path twisting and turning through the gravestones, under old trees of elder. 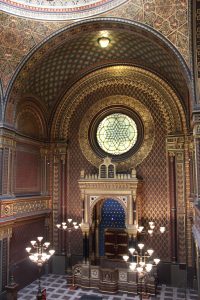 Here we are to the youngest synagogue of Prague: the Spanish Synagogue. I liked it a lot! The interior is very similar to the Alhambra of Granada (Spain) or to an Arabian Mosque with all its mosaics in shades of gold and yellow. 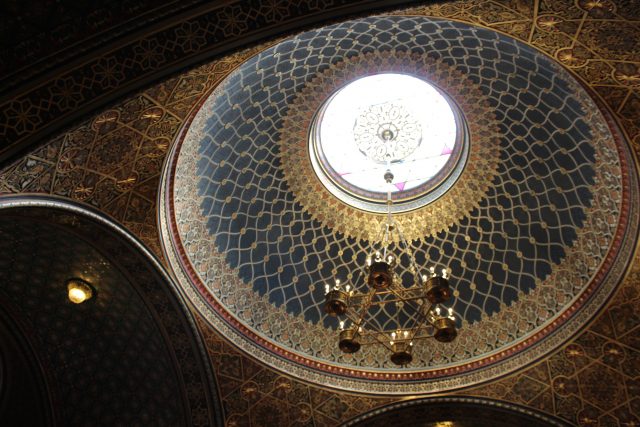 And I wasn’t wrong, because once I got home, I read some information on the internet about it. I discovered that, actually, once there was another building called the Old School or Templ instead of this synagogue and it was mainly used to educate the youngs and the adults of the Jewish society.  Then, when in the 15th century  the Queen Isabella of Castile ordered the expulsion of the Jews from Spain, a group of these found refuge in this building. From that moment they begun to call it as Spanish Synagogue. When the synagogue became too small, it was decided to build a new one, whose internal decoration recalled exactly the Spanish Alhambra. 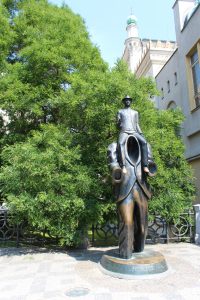 The ticket we purchased also included a small exhibition at the Robert Guttmann Gallery, called “My Cup of Kafka, Drawings, Prints and Paintings by Jiří Slíva“. The artist have teased Franz Kafka, Sigmund Freud, some Jewish customs and other Jewish authors. Very pleasant and fun! 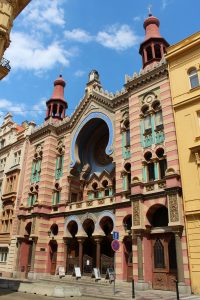 Our visit to the Jewish quarter ends with a visit only form the outside (time flies when you’re having fun!) of the Jerusalem Synagogue, located a bit far from the Jewish quarter, near the central train station.

It’s the largest synagogue in Prague. I saw some pictures of the interior and it looks really really awesome. Iregret I couldn’t get in! I have to go back and visit it absolutely!!

My itinerary ends here. Prague was really a beautiful (re) discovery. It is a sort of open-air museum that offers a lot of attractions, both architectural and historical-cultural.

To me, that I’m a “fan” of religions and World War II, in particular the condition of Jews under Nazism, Josefov quarter have worthed the journey! Really interesting!

Have you ever been to Prague? What is the quarter/building/place that has impressed you particularly?