My weekend in San Gimignano hadn’t been planned at all. Or rather, the idea of spending some days far from people and work had been swirling around in my head for some weeks. So when that Friday, on February, I received a message from my Japanese friend, in which she proposed me to work a week at Pitti Immagine in Florence, my mind focused immediately a bucolic Tuscany. Up-and-down hills, small medieval villages, estates surrounded by nature, good wine and good food. What a relax, what a pleasure!

I’d have liked to go to Bagno Vignoni and to stay soaking wet all the time in the hot springs, like an hippopotamus, but I couldn’t manage to find an accomodation convenient neither for my transfers nor affordable for my wallet (sigh!). So, I opted for the near, but beautiful Val d’Elsa. 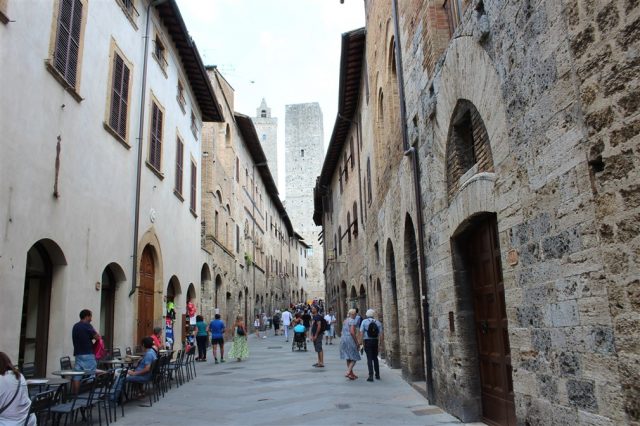 San Gimignano is probably one of the most famous Italian medieval hill town and, especially in spring and summer, a bunch of tourists, mostly from USA, come and visit it. The narrow lanes climbing up the hills, the palaces made with stones of the downtown bring me back immediately to the Middle Ages. The view from the ancient town walls  on the surrounding hills is stunning. The gelato and Vernaccia wine delicious.

Wait… where is San Gimignano? 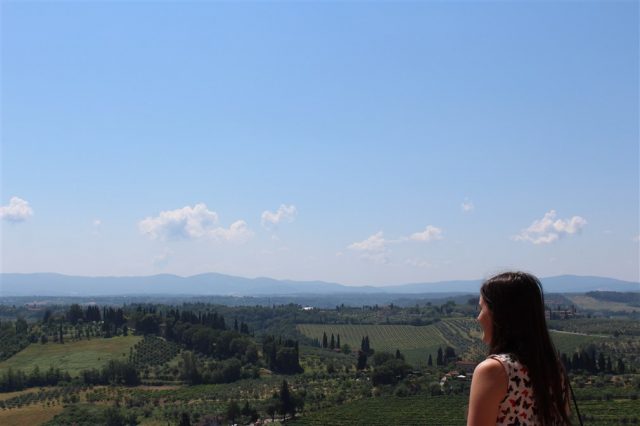 San Gimignano is located half way between Florence and Siena, in the deep of the Val d’Elsa. To reach the village, I suggest you to go by car. Indeed, the town hasn’t the train station.

You have to catch the Firenze-Siena highway (free toll) heading to Poggibonsi, then you have to follow the signage.

Why should I go to San Gimignano? 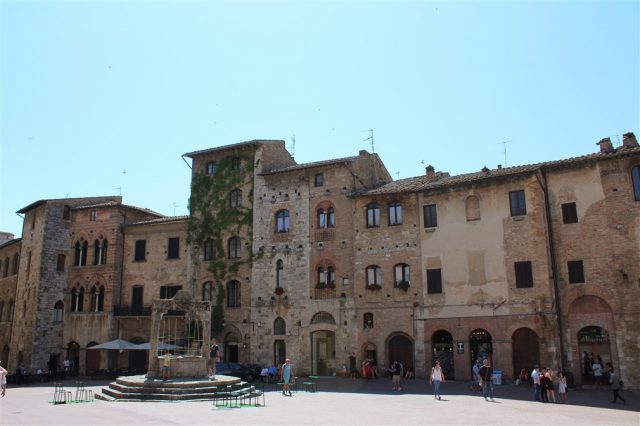 San Gimignano is today a UNESCO Word Heritage Site. The town has also a long history characterized by glory, decline and renaissance. It deserves to be known, believe me!

The town was named as San Gimignano in 10th century, after Bishop Geminianus, the Saint of Modena, intervened to spare it from destruction by Attila the Hun. Nowadays it’s also called, in a friendly manner, “The Manhattan of the Middle Ages”.

Located on the Via Francigena, the town was a stopping point for the Catholic piligrims on their way to Rome and, especially for the merchants, attracted by fine agricultural products, main source of richness since 1200.

How tall is your tower? 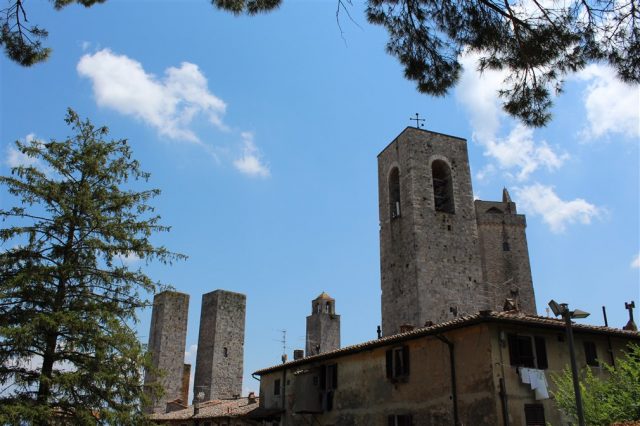 Scenary of some of the conflicts between the Guelphs and the Ghibellines, the period of main glory for San Gimignano was in the Middle Ages, under the power of the Ghibellines (supporting the imperor). It is in this period that a powerful aristocratic class grow within the town walls.

The rich families in the town were forbidden to show off luxury dresses or jewels, as sign of their richness. This resulted in competing families building towers of increasingly higher and higher heights. Richer the family, higher the tower. The only pact? Don’t be taller than the Town Hall Tower. In these years, in San Gimignano there were even 72 towers!

Under the power of the Ghibellines, the town grew incredibly and the population reached over 10000 people. The agriculture was also flourishing, especially for the saffron and the Vernaccia wine and the trade of wool and usury were widespread. In addition, in 1200, the town invested the saved money into public constuction projects and in churches. Indeed, San Gimignano attracted artists and writers from all over the Tuscany. Among them, Dante Alighieri visited the town in 1300, as ambassador of  Guelph League in Tuscany.

The decline of San Gimignano

The decline was just around the corner, though. The Black Death struck San Gimignano as well, and about half the townsfolk died. And it wasn’t just this! Also a intense famine affected the town. Exhausted and devastated, San Gimignano submitted to the rule of Florence, giving up to its political and economical indipendence. The towers fall down, the palaces get ruined and no renovated. It’s a real dark age.

However, the 14th and 15th centuries gave a little glimmer to San Gimignano. Some artists were in the town and they were called mostly form the clergy, the richer now, to decorate their churches. Among them, the most famous was the Ghirlandaio, who painted most of the Collegiate. Then, in these years, some palaces façades were plastered and the windows adorned with columns in the Florentine style. It was the new symbol of style and richness. At this point, the towers were out of fashion. 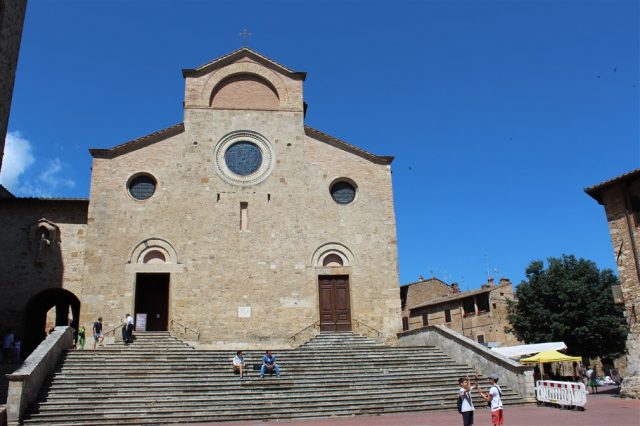 Then, another plague affected the town in 1600, probably the darkest year, and reduced the townfolk to less than 3000 people.

San Gimignano tried to survive and, from that point on, improved its agriculture, in the typical Tuscan style, as we see it today: carefully disigned and divided into fields, woods and grazing lands. The Cypresses, which are a symbol of Tuscany, were perfect as signals and delimiting, but they don’t cast a shadow on the fields.

Back to the Middle Ages 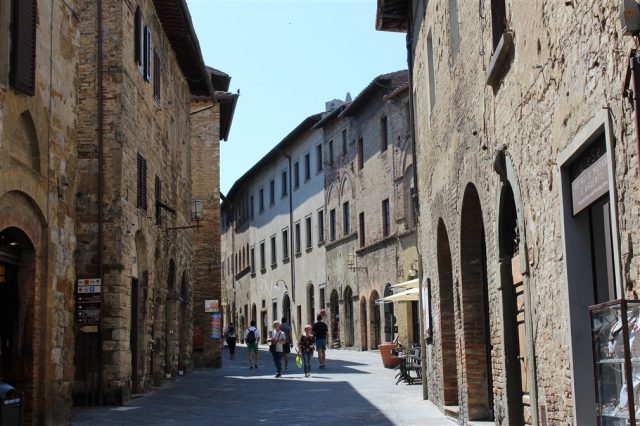 The nineteenth century is, finally, the period of the “Back to the Middle Ages”. Purely for tourism purposes, the buildings of the city are cleaned from the plaster, to revival the typical medieval Tuscan village, as we know it today. However, the towers have been decimated over the centuries and today there are only 15 left.

And the sorrounding hills…? Even them have been “restyled”. Today the gentle slopes are field for vineyards, olive groves, lavender crops and fruit trees. 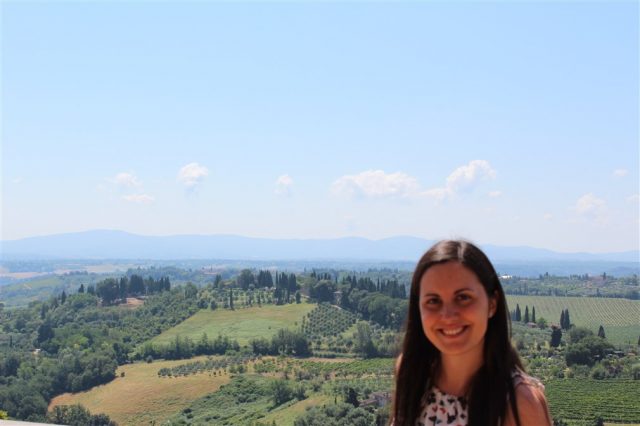 What should I eat in San Gimignano?

As in the whole Tuscany, the first thing which comes to my mind is undoubtedly the Bistecca alla Fiorentina, grilled T-bone steak. I can suggest you the restaurant Le Vecchie Mura, where they grill the steack directly on the hot charcoal. The view from the restaurant terrace is also stunning.

Then the gelato, the typical Italian ice-cream. The most famous gelateria is the Gelateria Dondoli, the gelato world champion. It’s located in the Piazza della Cisterna.

Finally, to drink, a delicious glass of Vernaccia wine, the typical San Gimignano’s white wine.  A pretty bar that I loved is La Vecchia Nicchia.

During the afternoon and the night of June 30th, the lanes in San Gimignano lighted up for the  Notte Lucente. Music, art, theatre performances, installations take place in the town squares and streets until 2 a.m. 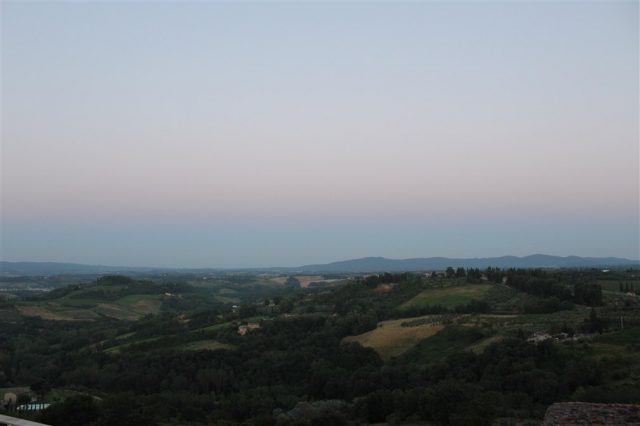 Have you ever been in a typical Italian medieval hill town ?

Relax in the Tuscan countryside: The Tenuta di Castelvecchio