In my last post I told you about my very first day in Prague for my sister’s bachelorette party. I also told you about the itinerary we chose to have a full immersion in the city. Today we will explore Malá Strana quarter, the Prague Castle and the little Tour Eiffel. We’ll also have fun in the Mirror Maze! 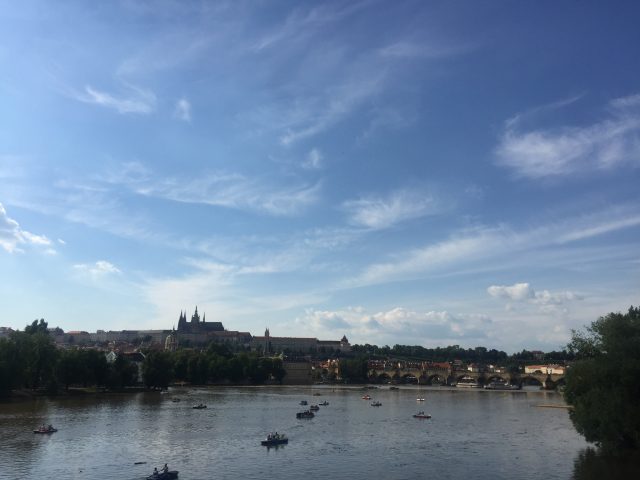 Built in 1357 by the famous architect Petr Parlér by the will of the king Charles IV, the Charles Bridge is definitely a place to be crossed when you visit the Bohemian capital. It’s said that it was made with sandstone mixed with egg yolks and its construction revolves around a precise dates and hours that would create a mathematical alchemy related to different analogies.

This bridge has two towers at its two edges and on both its sides there are statues of Saints in Baroque style. Among them, definitely stands out the one of Saint John of Nepomuk, which many legends are about. Indeed, his tombstone is placed on this bridge and it’s said that anyone who touches it will have luck for 10 years.

I highly reccomend to walk this pedestrian bridge at evening or at night, when it’s no more too crowded and you can enjoy the view on the Prague Castle.

The Charles Bridge connects the Old Town to Malá Strana, dove si trova where there is the Prague Castle. 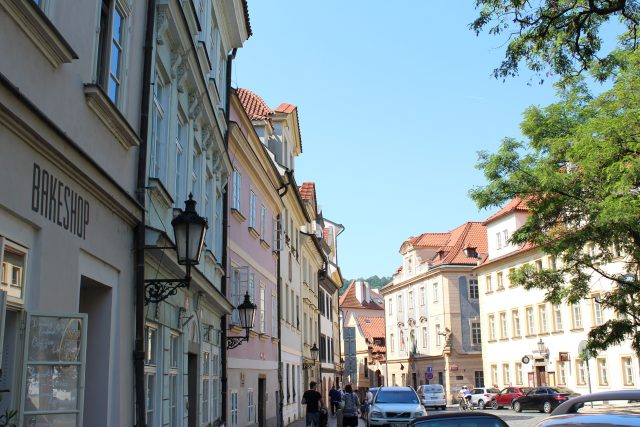 Malá Strana is on the opposite side of the Old City. 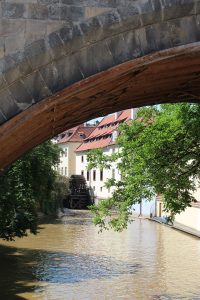 It’s charachterized by its narrow lanes which climbs up to the Prague Castle. I suggest you to stroll around a bit to enjoy an authentic Praguese atmosphere. 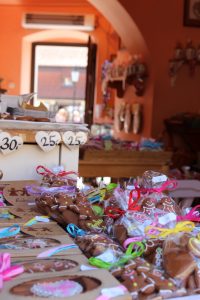 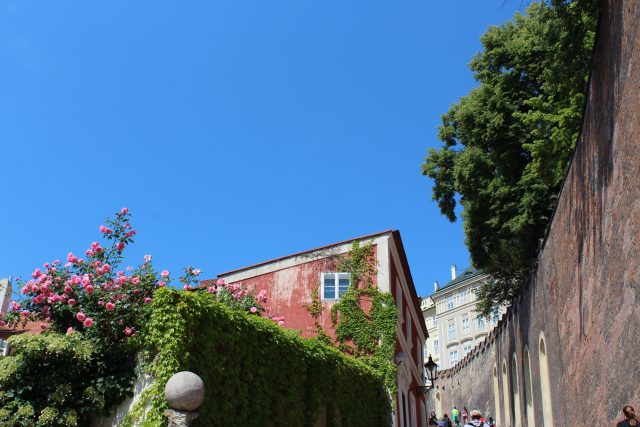 The Prague Castle definitely worth a visit. It’s not only the biggest castle in Europe, but it’s also the official office (sorry for the wordplay!) of the President of Czech Republic.  Inside the castel there are several buildings and also the very very famous Golden Lane, about which I’m going to tell you more in the next paragraph. But let’s go throught it, before!

First of all, I’d like to advise you that, as its hugeness, you need at least half a day to visit it properly. Therefore, I recommend to go there in the morning or in the afternoon. Furthermore, I suggest to be in front of the entrance by midday to see the Changing of the Guard, which is pretty suggestive and resamble to the British one. Conversely to the one which takes place every hour, during the midday one the marching band parades and the standard changing takes place in the first courtyard of the Castle. It’s an unforgettable experience for sure! 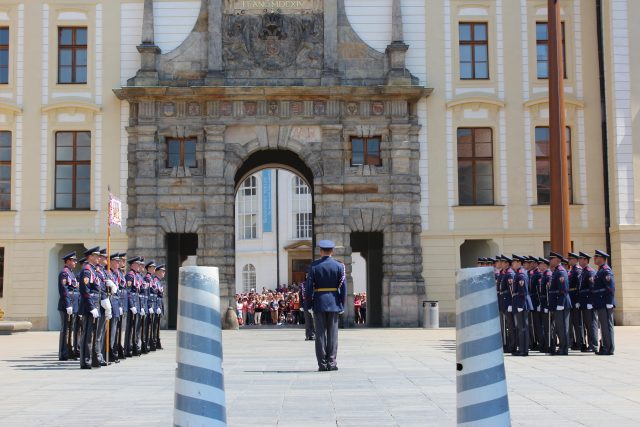 The entrance is right on the left of the Castle square and, even if you can go in freely and walking in the park and inside the walls, you can’t visit nor inside the buildings, neither the Golden Lane.

We went for the the Tour B ticket (250 Kr full-price – 125 Kr reduced-price), which includes the Old Royal Palace, St. Vitus Cathedral, Saint Wenceslas Cathedral,  St. George’s Basilica and the Golden Lane with Daliborka Tower (the old prison of the city). 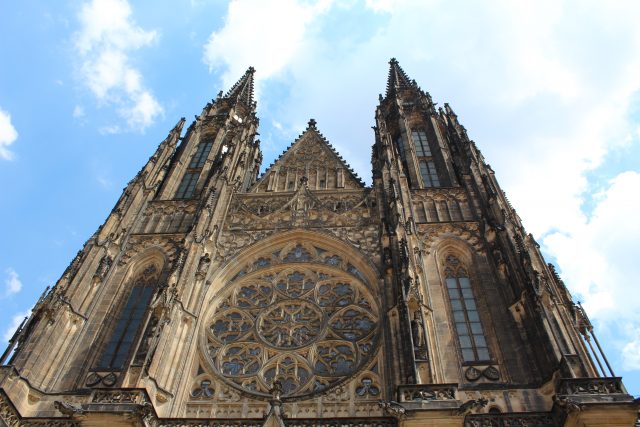 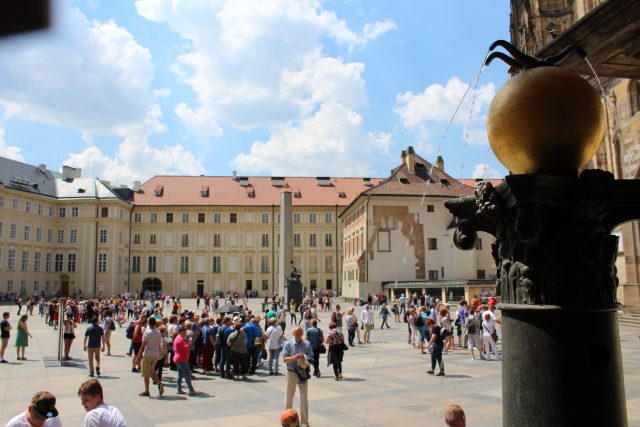 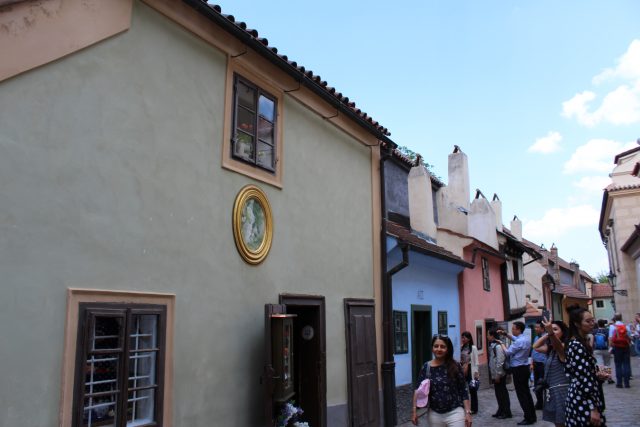 Inside the castle’s walls, this lane consists of small houses, painted in bright colours, built as accomodation for the 24 guardians of the castle. Later, the goldsmiths occupied these houses and lived there for several centuries. Indeed, the name “Golden Lane” derives from them. Also, many legends have it that alchimists have lived in these small houses and there have been trying to transmute iron into gold and to produce the philosopher’s stone and the elixir of life for the king.

Currently, you can find here many shops, which sell traditional food, marionettes and souvenirs. One of these houses exhibits also medieval armours; the remaining ones tells about the ordinary life of the Golden Lane inhabitants and about real people, who truly lived in these buildings.

Finally, worthy of attention is the building n.22, famous to have been the house of Franz Kafka from 1916 to 1917.

Petřín Tower and the Mirror Maze 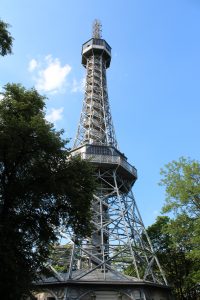 The Petřín Tower is the youngest tower in Prague. It was built at the end of 1800 on the top oh Petřín Hill as a copy of Paris’ Eiffel Tower. In my own opinion, it doesn’t worth to get in, unless you aren’t a panorama aficionados.

From the Újezd streetcar station, you can go to the tower on foot or by cablecar. On the top of the Petřín hill  you can also found a roses garden and the Mirror Maze. The last one is a nice idea to do something different and fun, especially for kids! 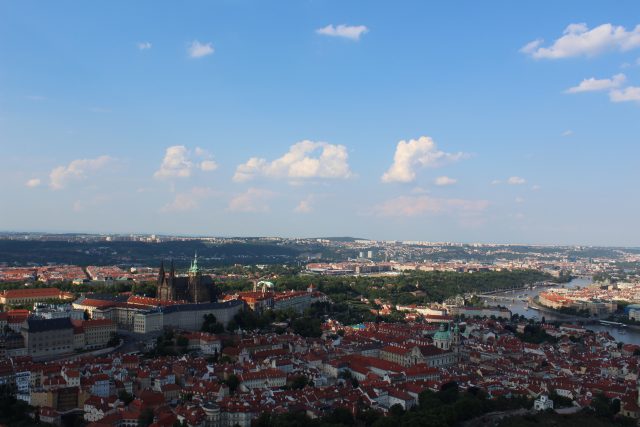 After an unlucky dinner and the night out, in which we met really strange people, we went back to our hotel.

During our last hours in Prague we’ll visit one of the most impressive and one of my favorite area of the city:  Josefov, the Jewish quarter. Stay tuned!

5 places you can’t miss in Innsbruck

Hotel Dieu, the hospital for the poor in Beaune
No comments yet
3-days Europe Itinerary Prague Travels View