Moving a bit from Italy, this time I’d like to bring you with me to visit a small but nice city in the Austrian Alps called Innsbruck.

Innsbruck is the capital city of the Tyrol region in the west part of Austria. Its position is very convinent beacuse it is very close both to Germany and Italy, so that you can reach it by car, train or bus. There even is an international airport not far from the city centre: while strolling along the streets, it’s quite impressive see such huge metal birds flying above your heads! An unique experience, believe me!

The city is actually popular for its enchanting imperial buildings, Christmas markets and ski resorts, so that, during Christmas time, it’s very crowded with tourists and skiers. Also, it is internationally renowed to be a winter sport centre and hosted the Winter Olympic Games in 1964 and 1976.

In addiction, it is a small and relaxed town and you can easily explore it in one/two days by foot.

I went there last January for a two-days break from my daily routine and to breath a bit of “Austrian air“. Before leaving for Innsbruck, I read a lot of exciting comments and I had a lot of expectation in it.

Apart from the freezing and reainy weather I found during the fist day, I literally fell in love with this nice city.

Here I’d like to introduce you some places in my own opinion you have to visit in Innsbruck. 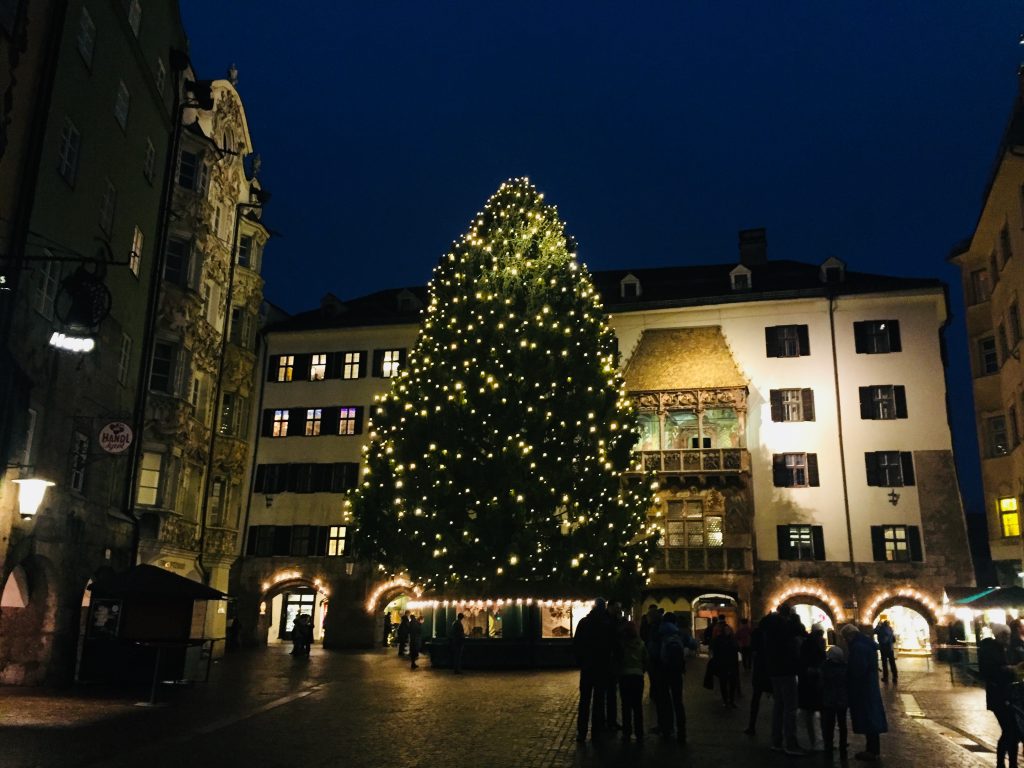 The Golden Roof is probabily the most famous symbol in the city. Completed in 1500, it is decorared with 2657 fire-gilded copper tiles and it was made for Emperor Maximilian I, nicknamed by Venetian people as “Maximilian Empty-Pockets“, as a sign of his wedding to Bianca Maria Sforza, to defeat all the rumors about imperial finacial difficulties. It also served as a lodge to enjoy several performaces and tournaments.

Nowadays, the buiding has been converted into a museum about the history and the life of Emperor Maximilian I and, during Chrismas time, you can enjoy a big Christams trees in front of the Golden Roof. 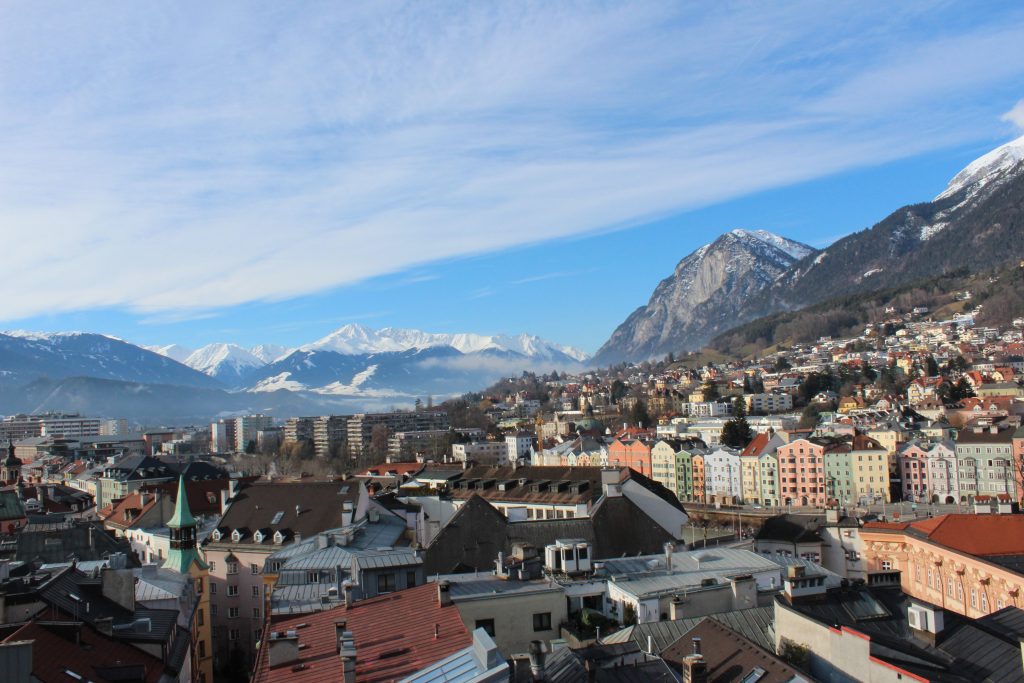 The second place you shouldn’t miss is the City Tower, which is near to the Golden Roof. It is a 51-metre-high tower, built in 1450; the onion dome was added 100 years after its completion. It is not so high, but in 1450 and comparing to the historical building of the downtown, it stands out!

In the Middle Ages, it was used by the guards to warn the citizens of the city of fires, hostile intruders and other dangerous situations, as well as to announce the hours of the day. Instead, the lower floors also served as a prison.

Today, if you want to have stunning views on the medioeval streets of Innsbruck, you can climb the 133-steps spiral staircase and just enjoy it! The 31-metre-high viewing platform overlooks the city centre, the sorrouning mountains, the Bergisel Ski Jump used during the Olimpics Games, the river Inn and Nordkette natural park.

Actually, sometimes the tower slightely shakes, especially when the huge airplanes fly over your head!

The entrance is in Herzog-Friedrich-Strasse 21, under the portico. The ticket is around 3,50€ (adult). 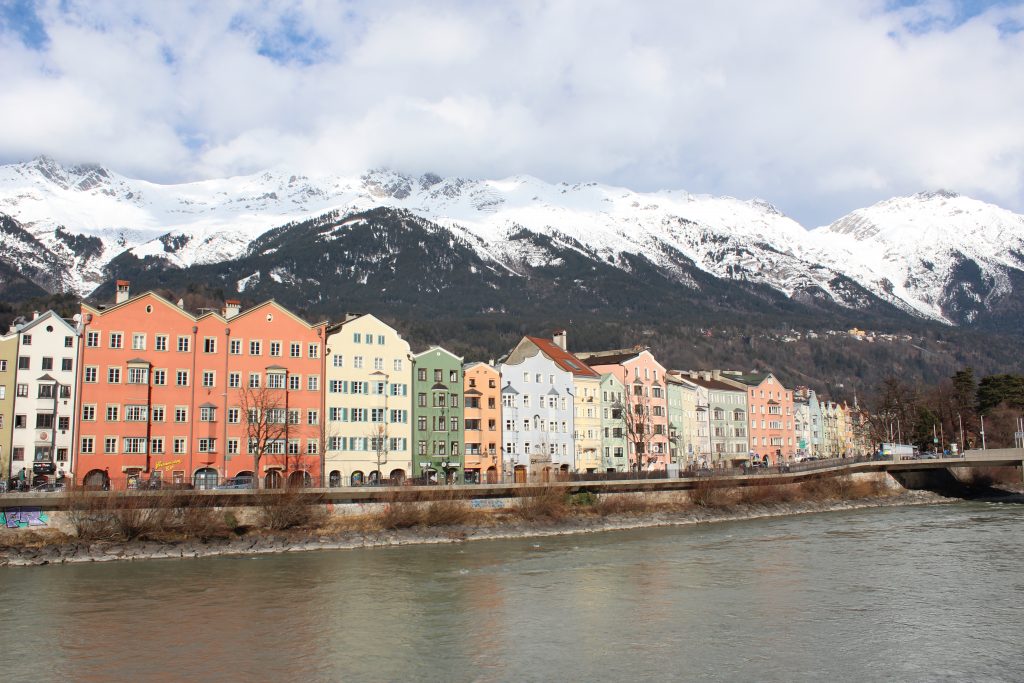 The river Inn flows through the city of Innsbruck. Indeed, the name of this city comes from it and means “Inn Bridge“.

Walking on Herzog-Friedrich- Straße toward Herzog-Otto-Straße you can find at your right the Ottoburg. It is actually a restaurant, but it seems to be the most ancient building in Innsbruck. Its gray façade is lighten by red and white shutters. It was built in the last part of the 25 Century as a part of the castle of Innsbruck. As written above, inside there is a fancy and typical restaurant inaugurated in 1745. It is not bad, even though the staff doesn’t speak anything but German and it is quite expensive! So, I can suggest it just for the traditional interior design. 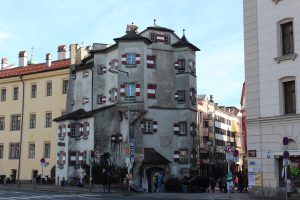 Going ahead, on the other side of Herzog-Otto-Straße, you can see the river Inn. I bet your sight will be immediately attracted by the colourful houses on the opposite side of the river. Actually, together with the Golden Roof, I think these buildings are the second most famous attraction of the city.

To enjoy their view and take some photos, I suggest you to go up to the city market (Markthalle), where, during winter, there is also a Christmas tree made of Swarovski crystals. 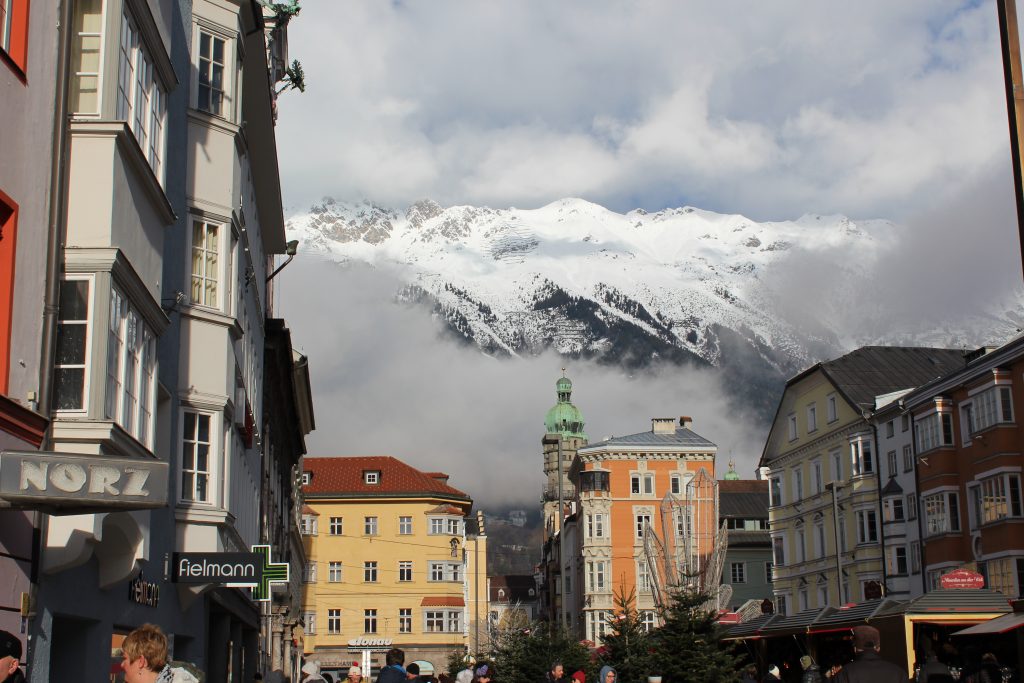 Strolling in a beautiful city is always relaxing. Above all if the tradition and the modern mix together. This is the case of the pedestrian Maria-Theresien- Straße, the right place to enjoy the Baroque buildings, while doing some shopping or drinking a coffee with a friend.

This street was built more than 700 years ago, when the city centre was limited by walls and you could access it just though the Saint George Gate. Maria-Theresien- Straße was the symbol of the “New Town” and there were just few farmers houses here. However, some years after, thanks for its proximity to the local rulers, members of aristocracy began building their homes outside the city walls. During Baroque period, many of them were converted into beautiful Baroque residences, as we can see today.

Nowadays, St.Anne Column, the Triumphal Arch and all the Baroque buildings intergate themselves with the modern shopping centres of Kaufhaus Tyrol and the Rathauspassage.

Finally, if you are a fan of the Hard Rock Cafes around the world, here in Maria-Theresien-Straße you can find the Innsbruck store.

Concluding, the last place I’d like you to try is the Adlers Bar, at the 12th floor of the Adlers Hotel. It’s near the Hauptbahnhof (the Central Train Station) of Innsbruck and, especially at night, you can have a great view of the city skyline.  There you can both dining and dinking a cocktail in the bar or in the terrace, if the weather is warm enough.

I tried the cocktails directly prepared in front of you, if you seat at the counter. Not bad both the taste and the price (around 10€)! Of course, the view is stunning, in particular at night. Very romantic and magic!